The fabric weave known as grenadine is prized among the sartorially inclined for its versatility and understated character. But why is it so appreciated, and how exactly is it produced?

Those who dress in a suit and tie just because they have to will usually find a plain silk tie, regardless of color, to be good enough to wear with a suit (though hopefully not a shiny silk, lest they look like a boy at prom). A step beyond this is the businessman’s standard: a printed silk tie with some sort of geometric pattern on it. A grenadine tie, meanwhile, comparatively represents a gateway into refined style. It’s truly something different; still very business-appropriate, but versatile enough for more casual use and a sign that you don’t want to settle for the commonplace in the way you dress. Here’s all you need to know about the weave called grenadine.

A Brief History of the Grenadine Weave

Grenadine is not the name of a material, but rather of a variety of open weave made of two warp (vertical) yarns twisted around the weft (horizontal) yarns that run perpendicular to them; this is also referred to as a “leno weave.” The result is a sheer fabric that is conducive to hot-weather clothing, and grenadine used to be popular for tropical garments. Yet, its earliest known use was in the form of black lace fabric worn in 18th-century France. Some speculate that grenadine originated in Granada, Spain because of the name (and presumably because it can get quite hot there), but it has made appearances throughout Europe, and its exact origins remain shrouded in mystery. The most direct reference we have to its geographic roots is its description as an “English gauze” (“garza a giro inglese”) in Italian. Indeed, giro inglese is still the name used to describe summer shirts made with the weave, and the term “grenadine” refers only to neckties.

Ties made of silk grenadine are woven exclusively in the Lake Como area of Northern Italy on historic wooden looms from the early 20th century.  This mode of manufacture not only adds to the artisanal nature of the product but to its overall mystique (and conversational value). In German, Grenadine is called “Schlinger” which highlights the distinctiveness of the weave.

Grenadine ties appear most commonly in two varieties–called by the Italian terms garza fina (fine gauze) and garza grossa (large gauze). A third sort of weave found more rarely is the prometeo (meaning “Prometheus,” though the significance of this mythological name is another obscure part of grenadine’s history).

The prometeo can best be described as a large honeycomb weave.  Lastly, there is garza piccola (tiny gauze), which is even smaller than garza fina, even if the two terms are sometimes used interchangeably by sellers. The difference is largely a choice of how much texture you want to emphasize. That being said, grenadine can be woven in many other combinations, but it just isn’t done anymore, probably because very few machines exist that can weave this kind of fabric.

Finer grenadines (piccola, fina) tend to appear more like smooth solids whereas their larger counterparts (prometeo, grossa) have more visible texture. When the texture of the tie is less noticeable it is slightly more formal, so the fine grenadines can be perceived as especially office-ready.

On the other hand, Sean Connery’s James Bond wore only garza grossa ties and never fina, always with suits, and his style certainly never suffered for it. Garza grossa and prometeo have quite a visible texture, which can be compared to that of a knitted tie, though a woven grenadine will have a greater formality than any knitted neckwear.

How to Wear a Grenadine Tie

The beauty of grenadine ties–and why they’re so popular among menswear aficionados–is their versatility. Because they’re made of refined silk, you can find them dyed in nearly any imaginable color to coordinate with a range of clothes. The material and weave together also give a grenadine the sheen of a printed tie, along with the texture of a more casual woven one.

When starting out with grenadines your first choice will usually be solid colors, because you can pair them not only with plain shirts but also with shirts that have stripes or even plaids. However, grenadine ties are also available with stripes, usually broader ones as well as other patterns. If the stripes are light in color, you’ll be able to see the honeycomb or brick-like rows of the grenadine weave even more clearly on the tie, which adds to the beauty.

As noted above, the choice of fina versus grossa boils down to how much texture you want to emphasize, but you really need both in your collection. Unfortunately, some men avoid garza grossa ties because their more open structure makes them prone to snagging, but, to be honest, all grenadines can catch on things. You may have to be a little more careful when handling a garza grossa–ensure that your fingernails are cut and well filed!–but this is hardly a deal-breaker. Knit ties are also susceptible to snags, but you probably wouldn’t ban them from your wardrobe, and grenadines are even more versatile. 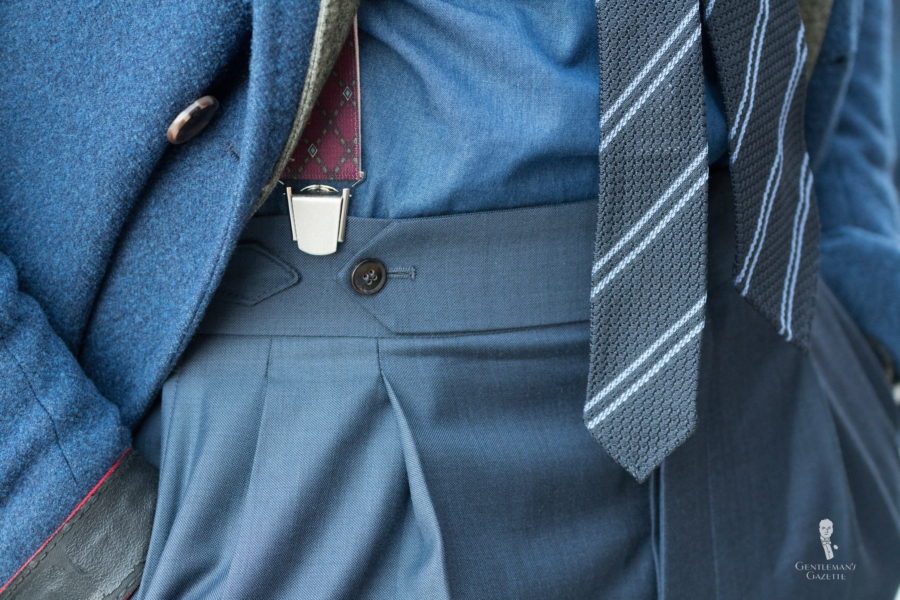 Clip-on suspenders with grenadine tie – study of greys and blues

Lined or Unlined Grenadine Ties? It’s A Matter Of Choice

Neckties can come either lined or unlined. With a grenadine, you’re likely to find both options. The lining or interlining is a piece of fabric, usually wool, used on the inside of the tie to give it more body.  Because the open weave on a grenadine allows you to see through the tie to some extent, if you have a lining, it will be dyed the same color as the silk shell. Lined ties tend to look more finished, so they are most appropriate for business suits. 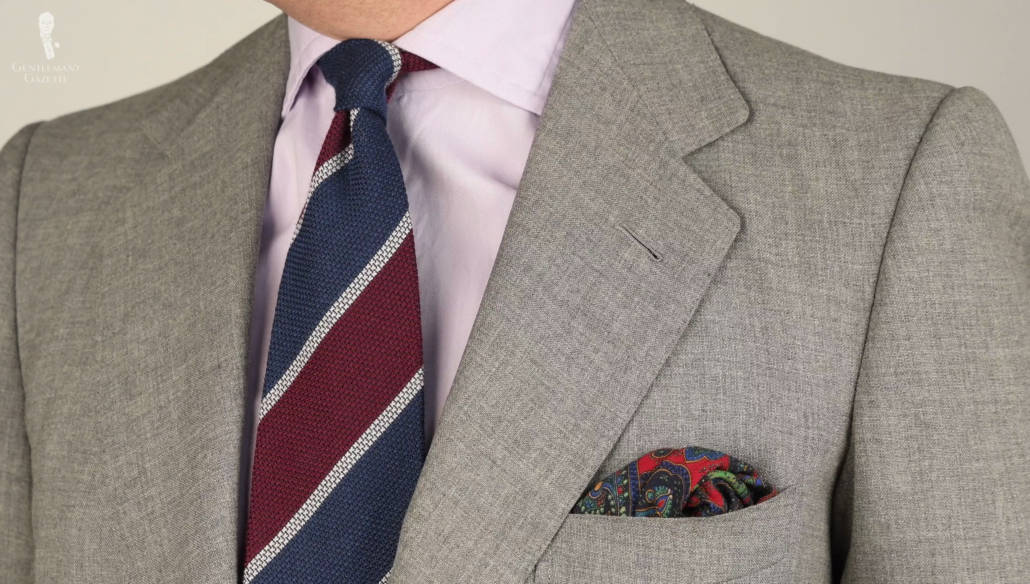 Unlined ties, especially in an airy grenadine weave have more of a handmade artisanal look, which can also make them appear more casual. Because of the thinness of an unlined grenadine, you will also see the impression of the tie folds on the underside and perhaps the shape of the keeper as well. Some men dislike this because people who don’t know about ties will assume theirs is defective in some way.

As a counterpoint, the less finished appearance of an unlined grenadine provides a dash of sprezzatura: the characteristic Italian nonchalance in dressing that avoids perfectionism, so if you want to show this sort of rakishness, unlined is the way to go. A garza fina or piccola without lining is especially light and wispy, which also makes it an ideal tie for hot weather days.

Its thinness pairs beautifully with a giro inglese shirt and a linen sport coat for a quintessential summer style. In this way, an unlined grenadine really returns to its roots as a breathable summer weave. Lastly, if you prefer a small tie knot, unlined is your best option. As already discussed, grenadines form a fairly thick knot, and a lining will only add more thickness. You can pull your tie tighter to shrink the knot, but then your risk stretching the fabric and making your tie too long. Keep in mind though that even an unlined garza grossa makes for a fairly thick knot, so you’ll want an unlined garza fina if you tie a or to stick to a four-in-hand knot with these.

A Word on Faux Grenadine Ties – Skip Them

In recent years, fake grenadine ties have appeared online, capitalizing on the popularity of the real thing. These can be had quite cheaply, for under $20, and they have a similar look from afar, so they’re popular for those on a budget. If you just want some texture and don’t care if your tie is an authentic grenadine, you might settle for these. However, the Gentleman’s Gazette upholds the general principle that it is preferable to buy better quality items that will last rather than “cheaping it out” in the short term.

You will likely desire an authentic grenadine tie eventually, and will probably have to replace the cheap one as it wears out faster–not to mention that it will never look as splendid as the real deal. The cost ($125 at Fort Belvedere) is not exorbitant–you’re not buying a Cifonelli suit after all–and you can choose a versatile color like navy, burgundy, red, or black that will get good use with the classic menswear colors of blue and gray. As a bonus, Fort Belvedere allows you to choose both the width and length.

There’s a good reason why a grenadine tie is considered a staple menswear item and an essential tie for every man. Solid grenadines come in a seemingly infinite range of colors, not to mention differently sized weaves, making them not only versatile but ultra-collectible. Meanwhile, a striped grenadine, especially one made of mixed materials, is just plain beautiful. So, if you’ve never tried a grenadine, now is the time to get one, and if you already swear by them, why not select another color for your collection?

How many grenadine ties are in your collection? Do you have a preferred weave? Share with us in the comments!

Any cookies that may not be particularly necessary for the website to function and is used specifically to collect user personal data via analytics, ads, other embedded contents are termed as non-necessary cookies. It is mandatory to procure user consent prior to running these cookies on your website.